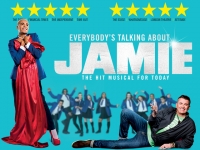 EVERYBODY’S TALKING ABOUT JAMIE - The Musical. The smash-hit musical comes to Norwich, featuring West End star Layton Williams and EastEnders’ much-loved Shane Richie as Hugo/Loco Chanelle both reprising their roles from the critically acclaimed West End production. Jamie New is sixteen and lives on a council estate in Sheffield. Jamie doesn’t quite fit in. Jamie is terrified about the future. Jamie is going to be a sensation. With an original score of catchy pop tunes by lead singer-songwriter of The Feeling, Dan Gillespie Sells and writer Tom MacRae (Doctor Who), this brand-new musical will have everybody talking about Jamie for years to come. Funny, fabulous and feel-good, this is a musical sensation not to be missed!

In this hysterical sequel, we catch up with the same four characters as they set off on the high seas. Hot flushes, mood swings, memory lapses, weight gain - these are a few of our favourite menopausal things! Cruising Through Menopause is a hilarious, heartfelt, reassuring and unflinching look at the joys of menopause and friendship. Step on board and we’ll take you on a trip of self-discovery, love and friendship all backed by a soundtrack of brand-new toe-tapping parodied hits! For these four ladies the menopause was not the beginning of the end, but the beginning of a beautiful friendship where love conquers, and friendships never fail.

The Carpenters - Voice of the Heart

Yesterday Once More, Goodbye To Love, Close To You, Only Yesterday; all the hits that every Carpenters fan adores will be featured. Plus great medleys put together from their many album tracks, songs that link together from The Beatles –Mr Postman, Ticket to Ride & HELP, a superb Bacharach and David medley featuring renditions of Do You Know the Way to San Jose, Always Something There to Remind Me, to name but two of these timeless classics. A Carpenters country medley with Top of the World, Sweet Sweet Smile, & Jambalaya is in great contrast to the sad and perhaps most popular songs on her last and most poignant album Voice of the Heart.

We Will Rock You

The worldwide smash hit musical by Queen and Ben Elton returns to the UK, delivered in a show that boasts the scale and spectacle that marked the bands’ legendary live performances.

‘A kind of magic. Spectacular. Magnifico!’ The Sun

‘An Unmissable event and a sumptuous piece of musical theatre. The Show Must Go On, and on’ Capital Radio

Since 2002 over 16 million theatergoers in 19 countries have been thrilled by this awe-inspiring production featuring Queen’s biggest hits including We Are The Champions, I Want To Break Free, Don’t Stop Me Now, Bohemian Rhapsody, Another One Bites The Dust and of course, We Will Rock You. A musical phenomenon not to be missed!

Designed and maintained by Web Buster UK Ltd 2016-2018.
All rights reserved. Awarded Best Web Design Company in North Yorkshire 2018.
Email:-sales@webbuster.co.uk to have a bespoke site developed for you today.